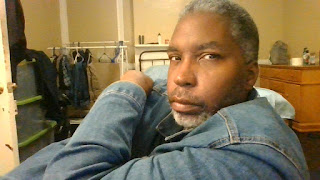 Although my background is Computer Science I have drawn and written most of my life.  I let you read my works for free but Art is not free.  It takes money to keep this site going so please buy my books.

The leaves of the 4 Leaf Clover symbolize, Hope, Faith, Love, and Luck.

Dedicated to my family and my Lord and Savior, Jesus Christ


Note, while these books in this Library are free, they are not Public Domain and can not be added to other art collections or or used or sold without the permission of Derrick W. Jackson.  I want to teach the youth.  I don't want them to make the same mistakes I did.  Read my books and learn how to write and to draw and to work for yourself.  You've got a GIFT USE IT!!!!!
By clicking on these links you agree that these works were created by Derrick W. Jackson and they cannot be sold or modified without his permission.
Note - these books are stored on my Google Drive and are safe.
I'ved used the aliases Integrity, Reazun, Mercurius,  El Arma Desconocido, and more.


1. Aaliyah Age of Angels - A graphic bio of superstar, Aaliyah

2. Android Journey - A collection of art by Derrick W. Jackson

4. Constant Tual From A to Z(Self Portrait) - A journal by Derrick W. Jackson book 1.

5. The Way The Truth The Life- An illustrated bible stories book covers from Jesus's birth to his Resurrection

8. Is Love War - Story about a Businessman who meets the love of his life after he gets arrested.  Loosely based on a true story.

9. I-Witness - An illustrated bible stories book covers from Jesus's birth to His Resurrection

13. Thru The Glass - The autobiography of Derrick W. Jackson

16. The Guiding Principles - A collection of art by Derrick W. Jackson. Pictoral guide form his style of Art called The Feather Arts.

18. Integrity 1  - A graphic Novel about a hero named Integrity book 1

19. Integrity 3 - A graphic Novel about a hero named Integrity book 1

20. Wild Tangent - A collection of Art by Derrick W. Jackson

27. How to Beat Microsoft - Outline

29. In Black and White - My letter to Pope Francis

30. I am the Light of the World -Scripture and The Lord's Prayer in Spanish

32. Forever the Brotherhood- Scifi story about going back to Earth

33. PSI Agent - A man get's enhanced psychic abilities when a chip is implanted in him

34. The Descendant -  About an Agent drawn to the President and his son

35. I Dream In Kawasaki - Lost Issues - Given to Ichiban restaurant and hotel owners (Valdosta, Georgia)

41.I Will Give You Rest - unfinished bible stories book

47. The Weapon Unknown - The Ultimate Weapon was created

54. Quentin Issue 3 - A Christian Comic about a young Black Boy.

64. The Praetorian - Movie Concept 2.. One came to take his life, the other came to protect it

70. Somebody Gotta Beef With His Country

77. Jesus Christ The Messiah - Bible verses in Matthew from Jesus's Birth to Resurrection

79. The 1Xtra Sketchbook -  Illustrations of all the DJ's / radio personalities for the Superhot UK radio station, 1Xtra.

81. Ebro's Top 50 Rappers - an illustrated list of Ebro's top 50 Rappers
82. Elijah and Elisha - illustrated bible stories of the prophets Elijah and Elisha
83. The Derrick W. Jackson Sketchbook - art by Derrick W. Jackson
84. The Praetorian - Draft - A Praetorian is chosen to protect the Baby Jesus while Joseph and Mary had fled to Egypt to escape Herod who had ordered the deaths of young children
SCREENPLAYS
1. Aaliyah: The Heavenly Kid - Aaliyah after her death comes back as a wayward Angel that was assigned to help a young teen named Vincent. This is a remake of The Heavenly Kid starring Jason Gedrick.
2. Star Crossed   - Jay and his soulmate, Nechelle have lived before. They were slaves named Jacob and Nettie. Jay and Nechelle have love each other from across time but is their love ill-fated.
Learn from my mistakes. Take what I am teaching and GO LEGEND.  GO BEYOND WHAT I HAVE REACHED!!!!

1. I Don't Like Horror - Collection of songs written and produced by Derrick W. Jackson. (except King Arthur Mix) Various Artists

Popular posts from this blog 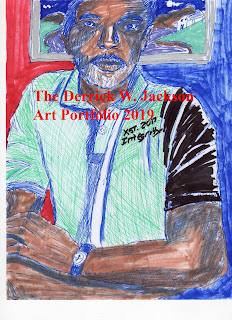 I have collected some of my best art works into this book.  If you like Art then you will LOVE this Art Book.  I have drawn celebrities like Axl Rose, Slash, Tom Cruise, NE-YO, Sheryl Underwood, Halle Berry and many more.  During this holiday season you can buy this book for $10. BUY NOW CLICK HERE . View The Derrick W. Jackson Art Portfolio 2019 on my Google Drive.
Read more

I have been writing for years with low to no sales. It's discouraging. To be honest, I have not spent enough time promoting and advertising my books.  I don't have a big budget to use to advertise my books, so I have to get creative.  I get little to no feedback on Twitter and Facebook and also instagram. Sometimes I feel like this is a popularity contest. Or a lottery where you might get lucky enough to write a New York Times best seller. Or land a great book deal.
Read more 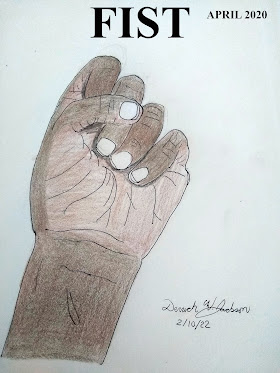 Fist is an art magazine.  Initially done by Derrick W. Jackson the intent is for multiple Black artists to submit their works to this magazine. Currently, I am working on the cover. While not all pictures will be of Black people, this magazine will showcase the works of black artists or anyone who draws Black subject matter.
Read more